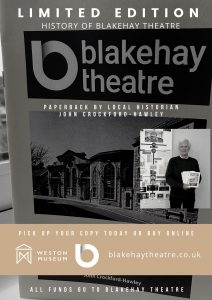 Local historian John Crockford-Hawley has completed a new limited edition book to add to his collection of many local historical books to help the Blakehay Theatre in Weston-super-Mare which is closed due to COVID-19.

At a time when the theatre would be throwing open our doors and giving you a peek behind the scenes, for the national event ‘Heritage Open Days’ this book tells the journey of this beautiful building in the heart of Weston-super-Mare from its beginnings in 1850 to being awarded ‘Best Evening Out’ in 2020.

The book details how the how the building was built and its original purpose in Wadham Street, through struggling times and wonderful expansions to disaster and rebirth.

The book is in full colour with beautiful pictures that have been meticulously researched after many of the historical documents were lost in flames during WWII. An amazing look back and historical record of one of the most important buildings in the heart of Weston-super-Mare.

This wonderful donation of time and money from John Crockford-Hawley, means that all of the proceeds from the sale of this limited edition book will go to help the Blakehay Theatre during these times.

The Blakehay Theatre closed its doors on Tuesday 17th March 2020 due to the pandemic and with no guidance on when the doors will reopen for live theatre.

The Blakehay Theatre offers a stimulating and inclusive programme at the heart of Weston’s cultural life, appealing to theatregoers of all generations. Their mission is to be leading the way in this zeitgeist for Weston-super-Mare. They create Theatre for the whole community, bringing national popular shows and treading subject matters onto the stage. To promote a creative hub for artists and performers in the local area and a cultural home for fans of the arts.
The theatre’s uniquely diverse program of locally produced and touring work is curated for the Weston audience and visitors. The Blakehay theatre is striving to create an inclusive creative community to make the most of a beautiful venue by using all of its spaces for artistic endorsers.
The theatre may be little, but is has big ideas and wants to survive as it has done historically through difficult times! The vision is to build a ‘big-city’ creative culture into the heart of the Victorian seaside resort of Weston-super-Mare. They need continued public support to help sustain and grow this vision through ticket sales, personal donations, sponsorship and help spreading the word!

The Blakehay Theatre is hoping to open as soon as it is possible, but in the meantime they are looking to use this money to buy equipment to bring theatre out of the building. So, for only £2.00 you can help, and have a piece of limited edition history in your hands.

The book is on sale in the shop at our sister site Weston Museum in Burlington Street, Weston-super-Mare, open Thursday to Saturday from 12pm to 4pm.

Alternatively you can purchase online and this book will be posted to you, or you can click & collect from Weston Museum. Alternatively, do contact our box office on blakehay@wsm-tc.gov.uk

We, at the Blakehay Theatre, are often asked how long we’ve been in Wadham Street or what the building was prior to becoming a Theatre.
Our History Wall has been a long time in the making – something we wanted to do for ourselves and our patrons. The wall will be found in our Foyer, which is accessible during Box Office hours and (normally) 1 hour prior to shows/events. It will give everyone who comes through our doors the opportunity to learn about the building and its history.
Tim Oliver, our Technician and Front of House team member, has been working extremely hard; compiling all the information and ultimately designing our History Wall. He has also written a free pamphlet for people to take and read to go alongside the wall itself. We would like to thank Tim for all his hard work and efforts and cannot wait to see our History Wall come to life.
We hope that putting the building’s and our history permanently on our wall will anchor it and act as a reminder of what has been and where we came from.

Weston Baptist Church was formed and originally met in the Assembly Rooms in West Street (now Loves Café) in 1847. The first pastor, from 1849 – 1877, was Rev. E. J. Rodway.
In 1849, the Church and congregation began to think about building a house for God so that His worship could be carried out without the inconvenience of hired rooms. Money was raised and at a cost of something less than £1000, the Chapel was built and opened in 1850. It was able to house about 300 worshipers. The original Chapel was, however, increased in size several times due to growing numbers.
Firstly in 1862, the Chapel was found to be too small for the growing congregation. This led to the decision to enlarge the place of worship. During the rebuilding, the Church met again at the Assembly Rooms. Instead of just an enlargement, the present Chapel (as we know it now) was almost entirely a new erection. This new chapel was designed by Hans Price at a cost of £1200 using as far as possible the materials of the old chapel. The capacity was increased to about 700 and opened for worship in 1864.
Then again by 1878, the congregation had increased further so necessitated the enlargement of the church to seat 850. The former Schoolroom and manse were also built at this time.
So although the Chapel as we know it today is not the original erection from 1849 – the rebuild in 1862 used as many materials from it as possible to create the new larger Chapel. Therefore building the history quite literally into the walls.

We’ll start with a quote, taken from the 1947 centenary brochure. We feel this captures and illustrates what our building went through during these times:
‘At 9:50pm on Saturday January 4th 1941, a bomb fell near the corner of the caretaker’s house and the corner property; smashed the stained glass windows; tore off all doors; smashed all the schoolroom roof and half the church roof; and wrought widespread damage.
During the next eighteen months repairs to the buildings were gradually done, and by the summer of 1942 the church was once again in good repair and the normal work of the church in full swing.
On Sunday night June 28th 1942, the church premises were totally destroyed by fire bombs.’
Our beautiful building remained destroyed and ruined for several years.
After lengthy negotiations with the War Damage Commission, reconstruction of the Church was finally begun in August 1950. The Commission paid for the building but members of the congregation had to provide for seating, electric lighting, organ and communion furniture. Money was raised by the Baptist Women’s League and the church was reopened, free of debt, in October 1951.
Once again, our building was rebuilt several times during the War Years – much like it was in the Early Years, but for very different reasons. However, just as before, the congregation came together to make sure the Church in Wadham Street remained as such.

In 1985, with dwindling worshipers, the Church closed its doors and the building and the land it stood on was initially sold to a property developer to build a block of flats.
At the very last minute, as contracts were exchanged, the Weston Civic Trust stepped in and offered a higher sum of money to save the building. The offer was accepted.
The church was by now not in a good condition and a series of projects were launched to make remedial repairs. The original plan was to turn it into an Arts and Community centre.
The Friends of the Blakehay (as it was now renamed) hosted many fundraising events to finance the work throughout the late 1980s. Income was also raised by hiring out rooms for local clubs and/or for local bands to rehearse.
During this time, plans were drawn up and the building was converted into a Theatre with a raked auditorium being installed.
Furthermore, in 1989, the manse (now an accountant’s office) was sold off to raise even more money and pay off outstanding debts.
As you may, or may not know, The Blakehay Theatre is currently owned and run by Weston-super-Mare Town Council, alongside our sister venues; Weston Museum and the Visitor Information Centre (VIC). Here is a brief timeline of what has been achieved in the time under the Town Council:
Weston-super-Mare Town Council Timeline:
2004 – The Blakehay Theatre was bought by the Weston super Mare Town Council.
2010 – The Front of House areas were refurbished and made accessible.
2017 – The logo was changed from blue to our now signature purple.
2017 -The upper floor of the old schoolroom was adapted to become the Studio; a multi-purpose, versatile space.
2019 – Foyer was redecorated.
2020 (hopefully) – Our History Wall will be added to our Foyer wall.

Bringing us right up to the present day. Although we may not currently be in the building, we are working hard to get it ready for us to slowly start re-entering it; starting with staff and working our way to a safe space we can open to the public.

We hope to see you all very soon in the beautiful and historic Blakehay Theatre.